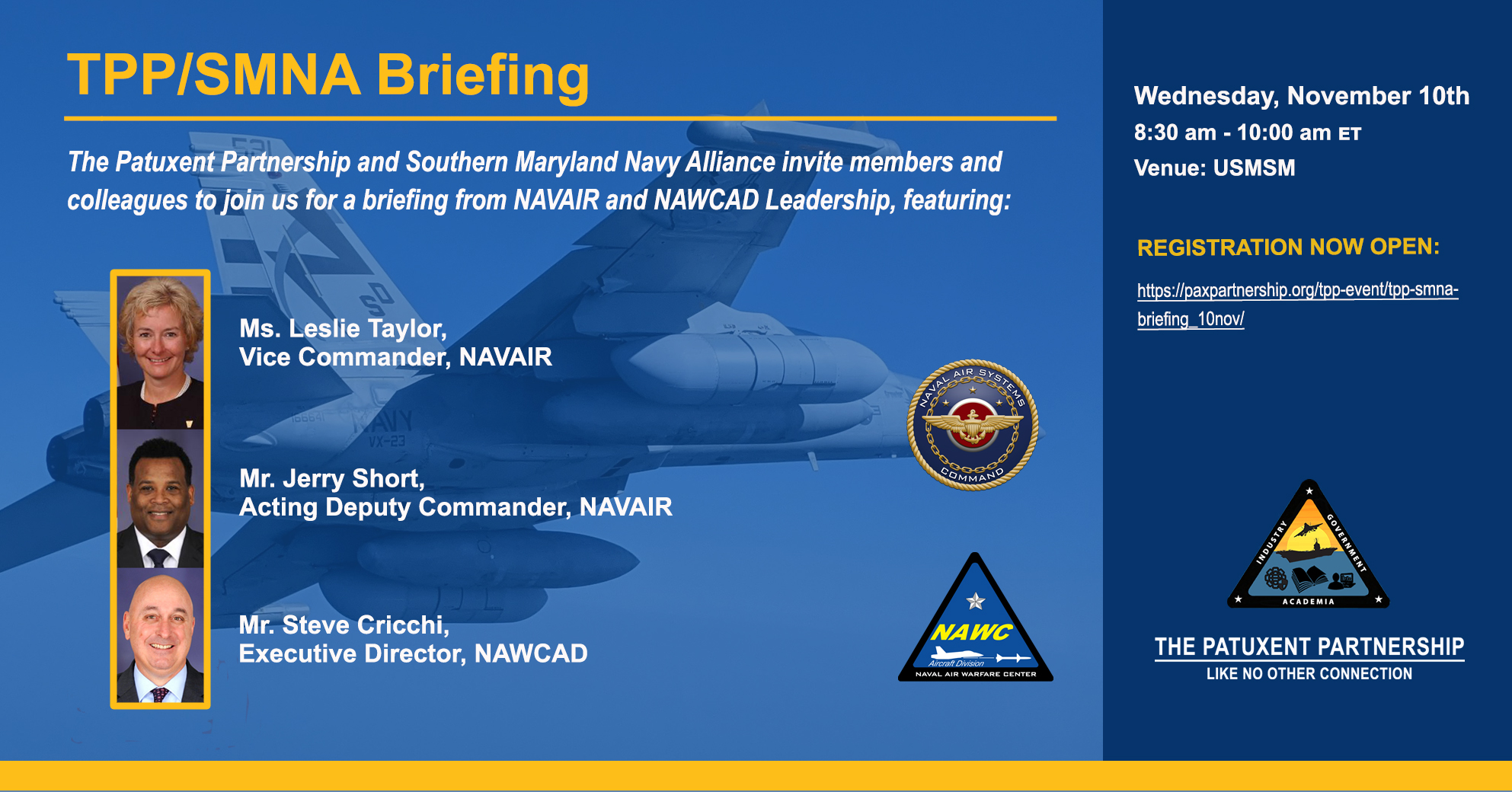 REGISTRATION
→ Registration is complimentary for all attendees.  PLEASE NOTE REGISTRATION IS LIMITED TO 150  ATTENDEES DUE TO SOCIAL DISTANCING/SEATING IN THE MEETING ROOM.
→ Please register here.  <<Attendees do not have to be TPP members>>
**Long form of registration link: https://paxpartnership.app.neoncrm.com/eventReg.jsp?event=235&
NOTE: If you do not have a TPP user account, you may exit out of the pop-up dialogue box that says – “Please log in to register for programs.” and just complete the screen that requests attendee info for Event Registration. TPP invites you to create a TPP user profile (username and password) for ease of registering for future TPP programs.

What the NAVAIR/NAWCAD is focused on, what issues they are looking to address, and any help industry/community they can provide.

Ms. Leslie Taylor is currently the Vice Commander for Naval Air Systems Command (NAVAIR), and a member of the Defense Acquisition Corps since its inception. With a workforce of more than 30,000 civilian/military personnel located at eight primary sites, NAVAIR provides support to naval aviation customers and affiliated Program Executive Offices in research and development, engineering, test and evaluation (T&E), acquisition, in-service support and repair/modification of aircraft, weapons and related systems.

With more than 36 years of civilian service, Ms. Taylor most recently served as the executive director for the Naval Air Warfare Center Aircraft Division (NAWCAD) and ensured resources necessary for mission achievement were executed effectively, safely and efficiently. In April 2015, while in this role, she was also appointed deputy assistant commander for T&E at NAVAIR and responsible for implementation of T&E policy arising from the offices of the commander, vice commander and deputy commander.

Prior to her time at NAWCAD, Ms. Taylor served as executive director for NAVAIR’s Integration and Interoperability (I&I) department, ensuring that I&I practices and policies were responsive to all naval equities. She was selected to the Senior Executive Service in 2008 to serve as the director of Flight Test Engineering within NAVAIR’s Integrated Systems Evaluation, Experimentation and Test Department, leading more than 900 flight test engineers across five geographic sites. Ms. Taylor’s prior experience at NAVAIR also includes Director for Warfare Analysis and Integration, where she was responsible for more than 200 multi-disciplinary analysts at Patuxent River, Md., and China Lake, Calif.;  Weapons Integration Integrated Program Team lead for the Joint Strike Fighter program, where she led a diverse team across the U.S. Department of Defense, U.K. Department of Defense and industry counterparts; and a technical leader within the T&E department as Air- Launched Ballistics branch head and the Close Air Support branch head.

Mr. Jerry Short currently serves as the acting deputy commander of the Naval Air Systems Command (NAVAIR). As the senior civilian reporting directly to the commander, he is responsible for planning and organizational effectiveness related to executing NAVAIR’s mission: to deliver timely and sustainable naval aviation capabilities to ensure warfighter success. With a workforce of more than 30,000 civilian/military personnel located at eight primary sites, NAVAIR provides support to naval aviation customers and affiliated Program Executive Offices in research and development, engineering, test and evaluation, acquisition, in-service support and repair/modification of aircraft, weapons and related systems.

Mr. Short’s federal career spans more than 32 years with a solid experience base in financial management. During his tenure with NAVAIR, he has held numerous financial management positions overseeing budget formulation, execution, and financial reporting. Mr. Short entered the Senior Executive Service (SES) as the NAVAIR Comptroller in May 2010. He was responsible for the strategic budgeting, accounting, and financial management of NAVAIR’s approximately $30 billion in acquisition and sustainment funds annually, for formulating fiscal policies, and for exercising effective controls over financial operations in the functional areas of budget, accounting and finance, and audit and review.

Mr. Steve Cricchi serves as Executive Director for the Naval Air Warfare Center Aircraft Division (NAWCAD), tasked with the responsibility for ensuring that the overall mission is executed in a safe and efficient manner and business and financial objectives are met. He was appointed to the position in July 2021.Previously, beginning in March 2020, Mr. Cricchi was Director of the Engineering and Cyber Warfare Group, one of six groups leading Naval Air Systems Command (NAVAIR) where he oversaw Command-wide engineering policy and planning for airworthiness and safety of flight, cyber warfare, mission engineering, and digital and information technologies. Mr. Cricchi also served as one of two Deputy NAVAIR Chief Engineers. In May 2015, Mr. Cricchi was selected as the Assistant Commander for Corporate Operations and Total Force for NAVAIR, where he was responsible for all NAVAIR command business operations including command administration, total force management, military and civilian human resource programs, security, public affairs, business and financial management, and infrastructure business operations.
In November 2005, Mr. Cricchi was named as the second Director, Integrated Systems Evaluation, Experimentation and Test Department within NAVAIR. He was responsible for the efforts of over 3,000 flight test engineers, military test pilots and project officers, aircraft maintainers, acquisition professionals, and associated contractor support personnel performing flight test and experimentation for the Naval Aviation Enterprise and other customers. Mr. Cricchi’s responsibilities included the operation of two test air wings with approximately 200 aircraft and the U.S. Naval Test Pilot School. In March 2005, he was selected as the first Director for Flight Test Engineering, where he served as the Chief Flight Test Engineer for Naval Aviation. He was responsible for managing and directing more than 600 engineers and engineering technicians performing integrated systems evaluation, experimentation and test across three sites within NAVAIR. In April 2001, Mr. Cricchi was appointed Deputy Director for the Test and Evaluation Engineering Department at NAVAIR. He was responsible to the Director for the technical efforts of the department’s personnel supporting test and evaluation of Naval Aviation weapons systems programs.