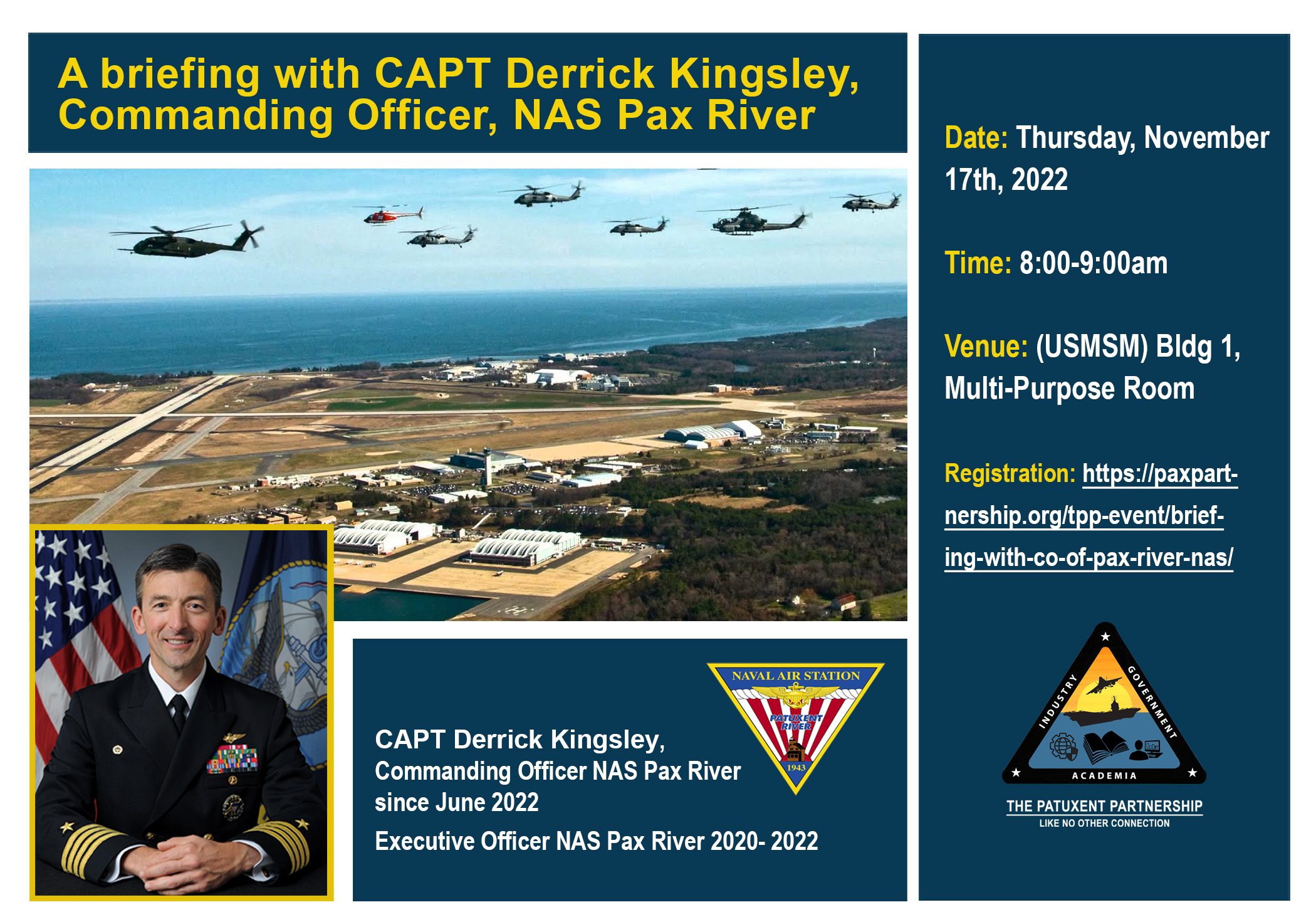 ABOUT THE SPEAKER
CAPT Derrick Kingsley, assumed CO position on June 2022, after serving as Executive Officer since Sept 17, 2020. Prior to that, he served as the interim commanding officer of Naval Air Facility El Centro in El Centro, California, from January to March of 2020. He served as the Chief of Staff for the Director of Operations (J3) from September 2018 to December 2019 after reporting to the Joint Staff (J35) in January 2018 where he served as the Chief of Operations for the National Military Command Center. Following his operational Command at Sea tour, work as the Chief of Naval Operations Plans and Policy Deputy Branch Head and lead Action Officer for the Strategic Laydown and Dispersal portfolio from January 2015 to January 2018. He commanded the “Eightballers” from September 2013 to December 2014, leading them through 11 highly successful detachments and various inspections.

CAPT Kingsley, became the Executive Officer for the HSC-8 “Eightballers” in June 2012 and completed an eight-month deployment with USS John C. Stennis Strike Group in support of Operation Enduring Freedom. Following his transition to the MH-60S, serve with distinction as the HSC-3 Executive Officer from May 2011 until June 2012. He reported to Helicopter Sea Combat Squadron (HSC) 3 onboard NAS North Island in July 2010, qualifying as an MH-60S Instructor Pilot. Detach aboard USS Carl Vinson (CVN 70) in January 2010 in support of Operation Unified Response in the Bay of Haiti.

In July 2007, Kingsley reported for a department head assignment with HS-5 “Night Dippers,” serving as Administrative Officer, Operations Officer, and Maintenance Officer. During this tour, he again deployed with Carrier Air Wing 7 aboard Eisenhower (CVN 69) in support of Operation Enduring Freedom. Prior to that, Kingsley reported to USS Boxer (LHD 4) onboard Naval Station San Diego in June 2005, serving as the Safety Officer and Officer of the Deck. Previously, in January 2003, Capt. Kingsley reported for shore duty to the Helicopter Anti-Submarine Squadron (HS) 10 “War Hawks” onboard NAS North Island. At HS-10, he became a qualified Instructor Pilot in all mission areas. During that time, he also earned a Master of Science Degree from the University of San Diego.

Kingsley is a native of Granite City, Illinois, and a 1996 graduate of the United States Naval Academy. Designated a Naval Aviator in 1998, he reported to the Helicopter Anti-Submarine Squadron (HS) 5 “Night Dippers” in September 1999, flying the SH-60F and HH-60H out of NAS Jacksonville, Florida. During this tour, he deployed with Carrier Air Wing 7 aboard USS Dwight D. Eishenhower (CVN 69) in support of Operation Southern Watch, as well as USS John F. Kennedy (CV 67) in support of Operation Enduring Freedom.

REGISTRATION
→ Registration is complimentary for all attendees.
→ Please register here.
<<Attendees do not have to be TPP members>>

NOTE: If you do not have a TPP user account, you may exit out of the pop-up dialogue box that says – “Please log in to register for programs.” and just complete the screen that requests attendee info for Event Registration. TPP invites you to create a TPP user profile (username and password) for ease of registering for future TPP programs.